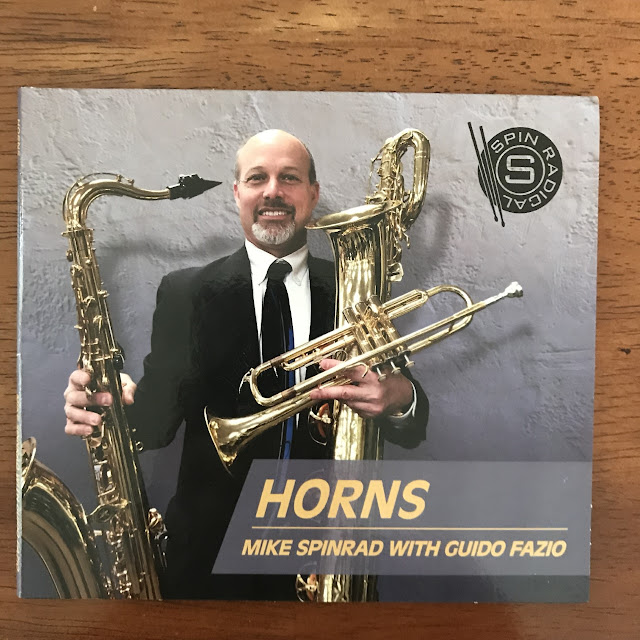 When you see a contemporary jazz album with a title like Horns, you might reasonably assume it features a horn player. In this case, however, Horns is a "showcase" for drummer Mike Spinrad. Huh? Well, it's simple. First of all, this goes back to my insistence that drummers make great bandleaders, as well as composers and arrangers. This goes against the stereotype of a drummer being more of an athlete and possibly a mathematician than a musician, and if you're a jazz fan you know that idea is absurd. Secondly, I find ensembles led by drummers are unusually dynamic and full of the right kind of energy. Is this because the drummer is directing through momentum? The next time I talk to a jazz drummer/composer, I'll ask that question first.

Spinrad took this particular direction with his new album because he was inspired by his good friend Guido Fazio, who arranges the horn section here and plays tenor sax and flute. It all goes back to Spinrad's first album as leader, It's Morning, which was recorded back in 2001. That album featured a simple piano trio. Spinrad wanted to expand his sound so he added a three-piece horn section (Fazio augmented by horn player Richard Conway and sax player Larry Stewart) as well as an organ (Don Turney, who also recorded, mixed and mastered this album), so the title must refer to the inspiration and freedom he discovered in his compositions when he added those brass muses. 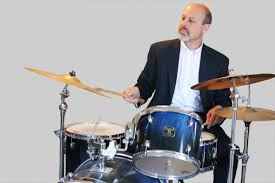 These eight originals, composed mostly by Spinrad, are played in several distinct styles and tempos. He wanted a different sound for each track, and he knew Fazio could supply the emotional context with his arrangements. "It's great to listen to someone with incredible technique," Spinrad explains, "but technique alone doesn't move me. Guido has great technique and plays with an incredible amount of heart and soul." It must be true, because each of these tracks have a life and an energy that are infectious in constantly evolving ways--even with the ballads. That goes back to what I said about drummers leading the band. While there are plenty of solos in Horns, ones indeed full of emotion, it's Spinrad's lithe drumming style that injects a steady stream of joy into this music. These songs move.

Here's an interesting tidbit about Spinrad--he started off playing in rock and roll bands and slowly switched over to jazz in high school and college. I've heard this before, rock drummers who move on to jazz, ostensibly to challenge and refine their talent. (Charlie Watts and Ginger baker both come to mind.) When I hear a drummer with this kind of background, I always attempt to hear those cues in their music. Spinrad reveals this once, in "Manny," which emerges as part of his "every song is different" scheme. What Spinrad proves in Horns is that he's extremely versatile, that he can do anything he wants to when he's behind his kit. Let's hope he doesn't wait another 17 years before he shows off his talent as a leader and composer again.