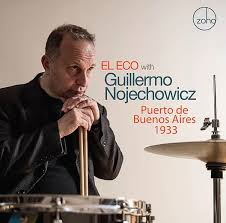 Imagine if all music reviews were like that. (And I've definitely seen a couple of reviewers who say little more than that, in a couple of hundred words of course.) But when I say this new album from Argentine jazz ensemble El Eco is really nice, I mean exactly that. You listen to the romantic melodies, the tight playing, the gorgeous sound quality, the passionate performances and, most importantly, the artistic risks and you think "Man, this is niiiice." It's not vague, it's not damning with faint praise. This is a jazz recording that immediately captures your interest and puts a smile on your face.

This project was the brainchild of drummer Guillermo Nojechowicz, who studied film scoring at the Berklee College of Music in Boston. As a child he used to travel to Buenos Aires with his family, and he discovered an old passport and photographs of his grandfather that triggered so many musical memories. When you think about the world in 1933, you'll understand why these memories are not necessarily happy ones--Nojechowicz's father was only three at the time his family left Europe for South America, and many of the people they left behind did not survive the Holocaust. That's why much of this beautiful music is imbued with deeper emotions such as the fear of change, or having to deal with extreme financial hardship so that your children might have a better future. We're no longer talking about things that are nice. 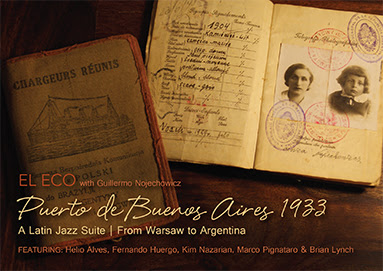 These hidden depths might not be immediately noticeable during a casual listen. Kim Nazarian's vocals, for instance, are very sultry and passionate and even border on celebratory, and it takes a keen ear to sense the sadness--but it's there. Many of the songs here start off with an almost funereal tempo, to reflect the troubles in Europe, and burst with energy once the South American influences emerge. And because we're talking mostly about Argentina, we do get those stirring undercurrents of the tango, with occasional punctuation from Roberto Cassan's accordion.

But this album belongs to Nojechowicz. It's his drumming and percussion that drives these songs, and his subtle inflections that determine where we are traveling at any given moment. He uses time signatures to underscore his themes with amazing subtlety. It's his attention to detail that makes the whole so musically pleasing, so complete in its execution. It's nice to hear a jazz release in 2017 that's both original and so very confident.
Posted by . at 12:09 PM