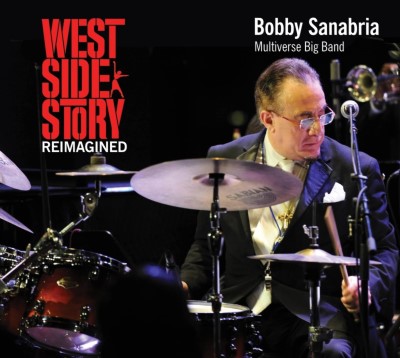 I'm not a big fan of musicals, on stage or on screen, but I do love West Side Story. Well, I love half of it, the musical half. I start rolling my eyes whenever I see the Jets and the Sharks prancing around with their switchblades, but Leonard Bernstein's songs and original score are, in my opinion, the apex of the genre. The music is just so expressive, so dynamic and so memorable. Every once in a while, a random section of "Maria" or "Somewhere" or "America" just pops into my head and stays there all day. In fact, one of my favorite classical CDs is Bernstein: Arias and Barcarolles performed by Michael Tilson Thomas and the London Symphony Orchestra--it contains an incredibly exciting interpretation of WSS's score via "A Quiet Place Suite" and "West Side Story Symphonic Dances." (On a side note, my mom went to high school with George Chakiris, so there's that.)

The idea of West Side Story being "reimagined" as a suite for big band jazz, especially one that is so focused on various Latin jazz traditions, isn't quite as radical as the liner notes suggest. But it does feel absolutely welcome. Drummer Bobby Sanabria and his Multiverse Big Band have release many critically acclaimed recordings over the last few years, and they specialize in presenting all of the distinct Latin variations on jazz, so much so that this 2-CD set contains a booklet that explains the different rhythms of each country. This performance, recorded live at Dizzy's Club Coca-Cola in NYC, pumps up the Latin aspects of the already Latin-centric score from Bernstein and adds additional layers of those aforementioned rhythms. If you're a fan of either Latin jazz or West Side Story, this album is a feast of those flavors. 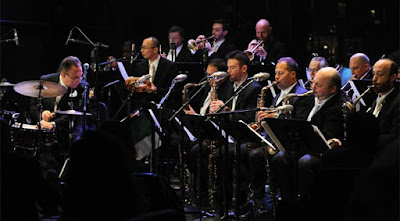 It's probably next to impossible to make this music sound sluggish or lethargic, so it's no surprise that Bobby's band is incredibly exciting. I also believe this has something to do with his role as drummer--I find that band leaders who are drummers are incredibly sensitive to maintaining high levels of energy and dynamics in their arrangements. It's also worth stating that Sanabria is a hell of a drummer and so supportive of his bandmates. With music that swings this hard, you'd expect him to be a wild man behind his kit. But he's also a confident ringleader who keeps every note tight and focused, and that's rare in a genre that prides itself on its loose and happy groove. Big bands need to be precise, Latin jazz needs to be passionate, and Sanabria finds the perfect mix of both.

There are two more reasons to grab this release. First, it's a 2-CD set with nearly one hour and twenty minutes of pure excitement, and it's only $21.99. I even saw it for less on Amazon. The second reason is that a part of the proceeds will be donated to the Jazz Foundation of America's Puerto Rico Relief Fund. After listening to this several times, I can honestly say that purchasing this CD is a no-brainer. You can buy it in a number of places, but check out Bobby Sanabria's website as well as that of Jazzhead (the record label).
Posted by . at 8:14 AM