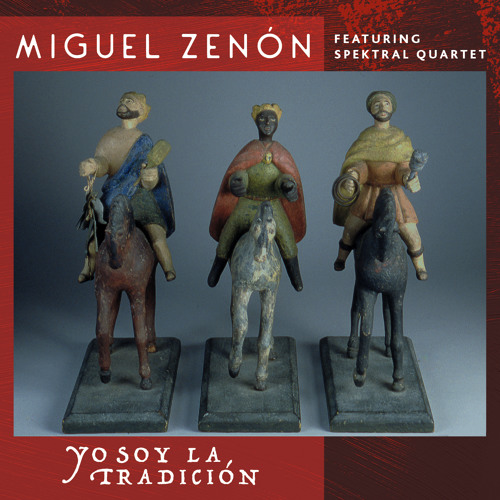 During the late '80s and early '90s, I made a concerted effort to expand my music horizons by exploring so-called modern music. By "modern," I'm talking about the contemporary classical music of the time, the stuff that thrived on the edges of the mainstream. While I gravitated toward the works of Philip Glass, Michael Nyman, Kevin Volans and Arvo Part, among others, I found a great source for exposing myself to new and interesting musical ideas through the Kronos Quartet. I purchased every album they released and always found at least one piece that stretched my conceptions about what music could be, and how I could educate myself about all of the different genres and composers I would have otherwise missed. I owe a lot to that particular ensemble--especially when it still featured the lovely Joan Jeanrenaud on cello. (Some of my music loving friends at the time had a huge crush on her, as did I.)

I'm reminded of those days when I listen to Miguel Zenon's new concert-length piece for saxophone and string quartet, Yo Soy la Tradicion. While Zenon's compositions rely upon his knowledge of Puerto Rican folk songs and jazz, the addition of the string quartet--here represented by the Spektral Quartet--touches on that same sense of esoterica, that feeling like we've wandered into a land where no one has walked before. Concentrate solely on Zenon's saxophone and you'll hear an emotive exploration of jazz figures, and a tone that bridges blues and the avant-garde. The music blossoms into a new realm, with the neatly calibrated counterpoint from the quartet propelling this journey more deeply into the heart of contemporary classical music, of gentle dissonance and exacting imagery that I haven't heard in a good 25 years. 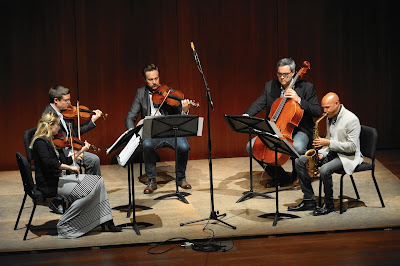 Zenon established these themes earlier when he recorded Jibaro in 2005. There he rounded up some of the older folk music of his native land with a goal to "identify the elements that make each tradition unique." Yo Soy la Tradicion launches energetically from there, using the string quartet as a way to integrate his vision with something that leaps over those genre boundaries. He spent much time studying the western canon of string quartet music and found a way to meld the two into a lush and complex sound that ebbs and flows while digging deep into the past. The Spektral Quartet, which includes violinists Clara Lyon and Maeve Feinberg, violist Doyle Armbrust and cellist Russell Rolen, has a seemingly intuitive way of appraoching the score. That's because Zenon consulted with them extensively while composing the piece and therefore captured their individual strengths as musicians.

In a vein that employs contemporary in the best possible of ways, Yo Soy la Tradicion has a slightly ethereal feel, enhanced by the excellent production values. There is a seriousness to the music, a whole that seems guided by the life experiences of each member of the ensemble. Zenon's saxophone isn't necessary dominant--it is one well-defined part among his equals. Each member is able to shine at different moments throughout, which gives this performance uncommon depth. This music is challenging in the way it takes familiar elements from folklore and wraps them in a sound that's both lovely and thought-provoking. There's a delicacy here that makes me feel as I've heard something that's like nothing else out there, and that's always a source of supreme pleasure.
Posted by . at 1:56 PM