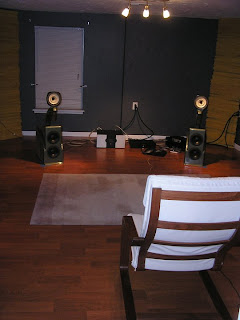 Randy Kunin isn't a speaker builder or designer. He considers himself an artist, a sculptor. He just happens to make some of the most beautiful speakers I've ever seen.

I've been Facebook friends with Randy for a few months now, and I've had the privilege of seeing him build his latest speaker, the Sedition, through a day-by-day photo album journal labelled "My Art." Using a Lowther PM6A as his treble/mid driver, Randy has taken the traditional single-driver-loudspeaker-in-a-big-giant-box recipe and has added a couple of 8-inch Dynaudio drivers to handle everything under 350 Hz. 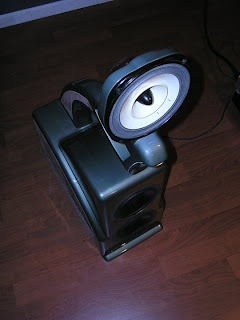 Well, after a few months the Sedition is finished, and it just received a review from Kent Johnson from Positive Feedback Online (which you can read right here: http://www.positive-feedback.com/Issue52/soundsbydesign.htm). It's a very positive review that suggests that not only is Randy's one-of-a-kind design one of the most intriguing Lowther-based speakers ever, but it's also a bargain at $7000. Honestly, after watching Randy toil over this speakers for months, I thought it would easily be twice that.

Congratulations, Randy! And here's to future speakers...er, sculptures from Sounds By Design.
Posted by . at 10:06 AM