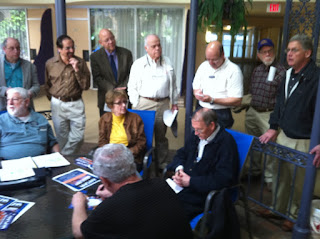 This year's AXPONA show had one feature I thought was unique to audio shows in general: the local audiophile society had a huge part in pulling everything together. The Atlanta Audio Video Club volunteered to help with the event, and their members were all over the Sheraton helping attendees find their way to all of the events. The Sheraton is a huge hotel, and the A-VCOA volunteers made everything easier to navigate.

I spoke with John Morrison, the head of the A-VCOA, at length last night. (He's the one seated at the far left of the photo, and AXPONA founder Steve Davis is the one talking at right.) I have to admit that I saw John all over Axpona, talking to everyone in sight, and I kept wondering who he was. Well, John is one of those audiophiles who loves to talk about gear and music, and it was fun listening to him talk about his vision for AXPONA as well as A-VCOA.

First of all, A-VCOA has only been around since 2008, but they have 64 active members and many more as part of their mailing list. He even spoke to me about the possibility of guest memberships for people in the southeast US who may not be able to get down to Atlanta for the meetings. I think that's a great idea...the more audiophiles the better. John told me that the A-VCOA does more than just hang out and listen to music. They've designed a small two-way loudspeaker that the group uses as a reference to evaluate gear. They plan on designing a tube amplifier in the near future as well.

The A-VCOA's true motivation for volunteering for AXPONA is trying to attract more audio shows to that part of the country. They DEFINITELY want AXPONA to return to Atlanta next year, and I hope Steve Davis seriously considers it. Axpona was a genuine delight to attend, a truly friendly gathering that is a much-needed antidote to the all-business attitude at places like CES.

To find out more about the Atlanta Audio Video Club, check out their website at www.A-VCOA.org.
Posted by . at 7:50 PM