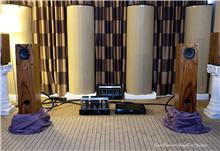 I heard a lot of buzz about these little single-driver speakers from French audio company Supravox, which are currently being distributed by Audio Mercury. These little speakers are called the Carlas, and they're 95 dB efficient and feature a frequency response of 50-18,000 Hz.

Mated with a modest tube amplifier and a mid-fi Marantz CD player, they imaged like crazy and were able to sound realistic and dynamic while playing the Nojima Plays Liszt CD from Chesky. Even though they are diminutive in size, they are big in sound. I was even a little surprised that they retailed for only $1999.