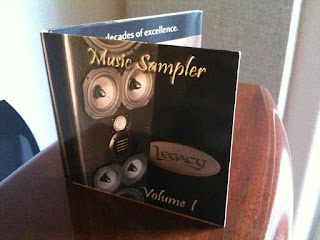 I have mixed feelings about music samplers given away at audio shows. I do remember one from Burmester Audio a few years ago that featured several remastered cuts from Pink Floyd's The Wall that sounded far better than any version I owned at the time. The Burmester sampler CD became a collectible among audiophiles, something that earned a reputation for offering astounding sound quality, and for free! Other than that exception, I do own a few music sampler CDs from a few audio companies, and not one stands out in my mind. So when I received Legacy Audio's Music Sampler, Volume 1 while visiting the Legacy room at the Lone Star Audio Fest a couple of weeks ago, I placed it in my pile of CDs that I brought to the show and then I promptly forgot about it. 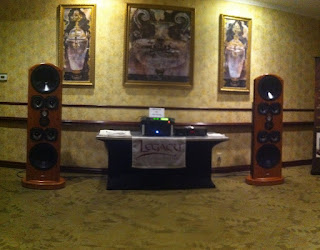 When I finally put my show CDs away a couple of days ago, I noticed it. In fact, I noticed I had two copies--perhaps Colleen grabbed one as well. I checked out the back of the cover and noticed the usual audiophile fare...the sampler opens with a Latin jazz cut from David Chesky, a trio of folk instrumentals from lutenist Ronn McFarlane, three more cuts from the blues duo Carey & Lurrie Bell, two cuts from The Craig Russo Latin Jazz Project and a Duo for Viola and Harp by Quincy Porter and Eliesha Nelson. All of the cuts sounded great and featured worthwhile performances, although the Carey and Lurrie Bell cuts sounded a little harsh and strident to my ears. All in all it was a fine effort, worth dragging to audio shows.

The final cut, as listed on the CD jacket, caught my eye: "Dynamic Drums" by Damien Kaplan, which was recorded at the Legacy Audio Studio. I have to admit a fondness for demo tracks that feature drums--remember that great audiophile chestnut The Sheffield Drum Record from the '80s? That LP kicked major butt. I won't even mention that Kodo CD with the giant drum that falls onto the stage--heard through a pair of Infinity IRS Betas, that was the first time I ever felt the legs of my jeans flap from the low frequency energy. So I hit track number 12, sat back, and waited to be impressed. 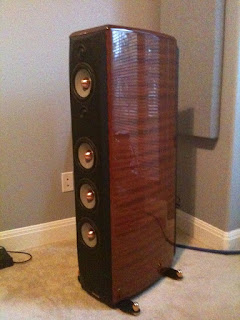 Oh my. I was not disappointed by "Dynamic Drums." Dynamic is an understatement. Played on what sounds like a conventional drum kit, this track starts off very quietly, with a majority of the beats done gently with Mr. Kaplan's fingernails on the drum heads. Then we hear some muted work on the cymbals that are glorious in the depth of the decay. Finally, there's a loud whack! as Kaplan strikes his snare with full force. He does it again. Then he launches into full attack for the remainder of the track's five minutes, and all I can say is this is what a real drum kit would sound like if stationed in my listening room. Through my very capable Opera Grand Callas loudspeakers, there were no veils, no sonic compromises. Over the last couple of days I dragged several people into the listening room to hear this--every one walked away in a daze. This is a stunning demo track for percussion. 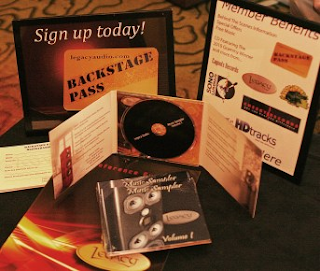 So how can you get this sampler? That might be a little tricky. You might be able to score one from a Legacy Audio dealer, or you can attend an audio trade show where Legacy is an exhibitor. The easiest way is to join Legacy Audio's Backstage Pass program on their website, and they'll send you one. It's free, so why not? It's worth it just to hear "Dynamic Drums."
Posted by . at 5:17 PM