Madeleine Peyroux at the One World Theatre in Austin 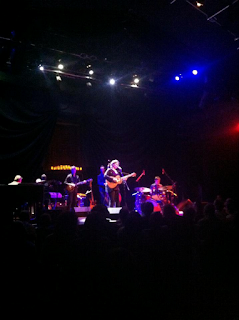 I've been resisting blog entries about live shows I've attended here in Austin for several reasons. First, I think it's a waste of copy space to report on concerts that have already happened--I mean, what are you supposed to glean from such articles? The event already happened, so what's the point of gloating about it? And second, it's really hard to take decent photos of darkened stages without a press pass and a high-dollar camera rig.

That said, I wanted to talk about the Madeleine Peyroux concert I attended Friday night at the One World Theatre in Austin because a) Madeleine Peyroux is such a fun performer, and b) the One World Theatre is such an outstanding venue. I'd never been to One World before, but in a nutshell it's an intimate venue with just 300 seats, and those chairs are arranged in a way that guarantees that every seat is a great seat. It's not cheap to attend concerts there, but they consistently attract the type of talent that appeals to those who don't particularly like conventional venues with their vast spaces and overbearing sound systems. If you want to see your favorite performers up close and in a space with excellent acoustics, I can't think of a better place than One World.

A have a couple of Peyroux LPs in my collection, both MoFi pressings, which indicates that she's a performer who values great sound quality on her records. Performing live, she reveals a playful and sanguine approach that suggests she's knocked back a few backstage before the curtain raised and she's ready to hang out with her audience and have some fun. (I know that sounds vaguely troublesome, but the overall effect is of pure charm.) Her banter between the songs is engaging and humorous, and she's not above an obscure joke or two. When she sang the title track of her latest album, Standing on the Rooftop, she explained how it related to her upbringing in Brooklyn and how as a girl she would often retreat to the roof of her apartment building to reflect and suggested to the Texan audience that they may call the song "Standing Outside Your House." It was funnier when she said it.

Her back-up band was talented and seasoned, and nearly every song gave her fellow performers a chance to improvise in the true jazz tradition. I was amazed at how deeply the musicians could dig into her retro-tinged songs and find a unique groove in which to play. I know I like to bash female vocalists and the manner in which audiophile embrace their hipness, but Peyroux is much more quirky and adventurous than women such as Diana Krall, Patricia Barber and Rebecca Pidgeon.

A final shout-out goes to Scott Oliver, an Austin audiophile who invited Colleen and me out for the evening with a group of fellow music lovers. We had a wonderful dinner at the Grove Winebar (which Scott described as the only cool place to hang out on the Westside area of Austin), and we were able to talk audio with a very well-heeled group of audiophiles who championed a very lofty selection of gear that I'd never heard of--CH Precision's $33,000 preamp/DAC, anyone? Thanks goes to Scott, his wife Maria, Bill Blaylock of Concept Electronics and everyone else who came. 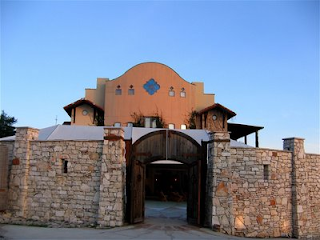 Colleen and I plan to return to One World in September to see Bela Fleck, one of Colleen's favorites. I'm looking forward to it!
Posted by . at 10:48 AM