The Memorials' Delirium on CD 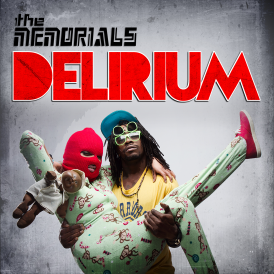 The first track on the new album from The Memorials might throw you. Titled "Dreams," it's fairly typical pop diva stuff, slick and over-produced, something that might come from any one of a dozen chart-topping pseudo-icons. It even plays that ubiquitous deep-bass synthesiser bend over and over, probably the same one that's sampled gratuitously in the trailer for the new Katy Perry concert movie (which I was subjected to when I saw The Hunger Games last month). I almost yanked Delirium out of the CD player and moved to the next album in the stack.

It's all a ruse, however. The Memorials consist of singer Viveca Hawkins, who usually sings with the likes of Cee Lo Green and The Coups, and Thomas Pridgen, who is best known as the drummer for The Mars Volta. Nick Brewer, who attended the Berklee College of Music along with Hawkins and Pridgen, rounds out the trio with his guitars. Let that sink in a little--prog metal meets R&B diva? What does that sound like? Exactly what you expect it does--manic, mean, edgy and very, very experimental, all with a big helping of soul. Once you get past that orphan of an opening cut, Delirium kicks in like an angry mofo, a thrilling hybrid idea, bolstered by Pridgen's truly phenomenal drumming and programming skills.

This is second album for the Memorials; their 2010 self-titled debut and its follow-up tour in 31 cities garnered them quite a following. With their sophomore release they're trying to accomplish something more confident and chaotic at the same time, the proverbial wall of noise. While this may sound familiar to fans of the Mars Volta, who were musical anarchists who often left their fans behind in a noisy, turbulent wake, the sound of The Memorials is always anchored by Hawkins' lovely yet powerful voice. It's a cross between the gutsy soul of Jill Scott and the straightforward pop sensibilities of Debbie Harry--I challenge you not to be reminded of Blondie at least once during Delirium. It's not obvious, but it's there. 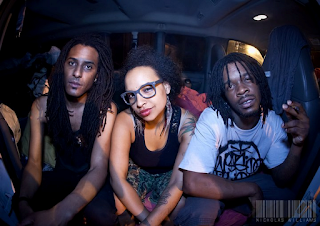 As thoroughly as this album rocks--and most of the cuts are so epic in length that they will wear you out--I'm still perplexed by "Dreams." The rest of Delirium is so very consistent from the grinding rhythms of "Fluorescents" to the flute and keyboard flourishes of the closing cut, "Mr. Entitled." ("I'm So Anti-Me," the penultimate track, starts off much softer and more acoustic than the rest of the songs, but it does make more sense relative to the whole--especially when it gets going.) "Dreams" sounds like it belongs on another album, that the sound mixers at the studio put someone else's track in by mistake. So if you get this album, and I recommend that you do, either jump ahead to track 2 to avoid confusion, or go into Delirium complete informed about its contents. Once you get over that opening cut, you'll be amazed at the balls-out energy, the inventiveness and the soul of Delirium.
Posted by . at 2:10 PM