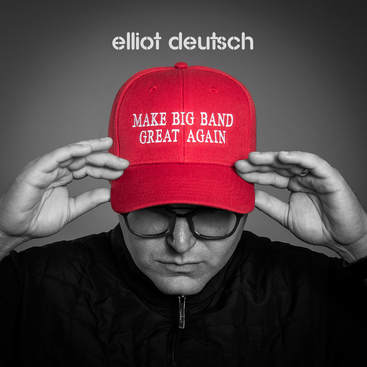 You got one of them red caps on the album cover, you start off with "America, the Beautiful" and you follow up with original compositions with titles such as "Fake News," "Repeal and Replace" and "The Great Wall"...what am I getting myself into here? Fortunately, Make Big Band Great Again is not what you think, or it's exactly what you think, depending upon your views. "It made no sense to me that Donald Trump aimed to dismantle the progress of the Obama era while simultaneously presenting himself as a man of the people," composer and arranger Elliot Deutsch explains.

This EP--outside of the patriotic intro, there are only four compositions here--is Deutsch's musical reaction to the 2016 election as someone who depends upon Obamacare and the NEA. He originally intended this album as a tribute to Los Angeles, which is why the final song is titled "Pink Sunset (Over Gray Skies)." You can listen to these four main pieces without attaching any message to them, since this is a bright, jazzy big band performance with a tight groove and solid melodies. If you dig deep into Deutsch's intentions, the music changes. 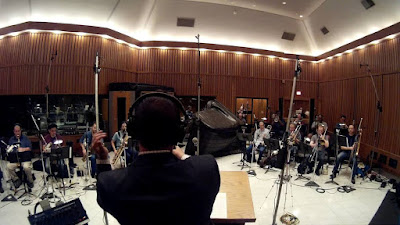 "Repeal and Replace," for instance, alternates between a tighter groove that represents Trump's vision for health care, and wild sections that describe the actual mess he created. A lone trumpet represents a single citizen trying to navigate the chasm. "The Great Wall" has an enthusiastic and celebratory feel to it which is meant to symbolize the idea of a "migrant-free utopia" while secretly presenting the idea that an easier path to immigration would be the wiser solution.

This is a brave album, just like John Daversa's American Dreamers--one has to think that a majority of big band jazz fans are older and possibly conservative in their views. That brings you back to the title, about making big band great again, and how that might occur in one of two ways--by enlightening the current fans or by bringing in the younger folks who are more in tune with this approach. Then again, music has always been an effective medium for those who cherish free speech. If that brings more people to big jazz, or if that makes some people re-evaluate their values, it's a good thing.
Posted by . at 9:37 AM