St. Paul, Minnesota, isn't known for being a hotbed of Brazilian music--or maybe it is since I know very little about the place--but pianist Rebecca Hass is doing something very special up there with the recording of her debut album, Florescer. Haas describes herself as "addicted to Brazilian rhythms" and she reached out to me after reading my review of Alexandra Jackson's new album a couple of weeks ago. At first she seems like someone new to the game, a young pianist and composer who's trying to get a foothold in the industry through Kickstarter, email blasts and whatever works in this day and age, but she's actually been performing for quite some time--she's been playing with the percussion group Batucada do Norte for a dozen years.

Florescer, which is Brazilian for bloom, instantly reveals those ties to percussion and South American rhythms. Hass originally conceived these compositions as solo piano works, but she enlisted the help of her friend Tim O'Keefe, who is an expert on all types of hand-drumming techniques. That's what you get with Florescer--Hass' piano, which is strong, steady and even a bit muscular, paired with O'Keefe's exotic drums. O'Keefe is just as steady--his style is measured and seems so coupled to Hass' dynamics that they chug along like a machine with two engines. 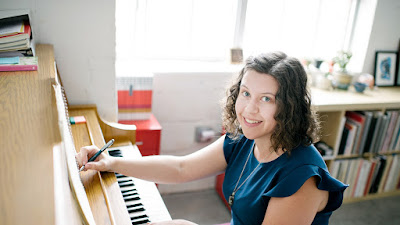 As a result, the music here is unusually focused--the first song, "Maracatu do Manitim," is angular in the way it takes modern Brazilian themes and sets them on their side, deconstructing the rhythms and laying them out so the listener can see how they're built. She's also fond of the lower registers of the piano in many of her songs, which gives the proceedings a certain weight that is not necessarily common to the genre. When she speeds up the momentum, such as "Baiao da Bicicleta," that's when the parts fit back together seamlessly. There's even a tango, "Naquele Tempo," which indeed uses a slightly slower tempo than usual to once again reveal some of the genre's secrets.

Florescer does have that "square one" feeling that comes from getting out there and taking a chance--I think Hass might benefit from a larger ensemble around her in future recordings, but that requires time and perhaps more hard work. This album shows that this pianist/composer has unusual ideas about Brazilian music, and she isn't content to just play it the same way as everyone else. This is a snapshot of an artist at the beginning of a long and exciting journey, and I'm happy that she reached out.