This is the second jazz review in a row of an album designed to be part of a series, but this Gil Evans Orchestra CD I have here is more of a landmark than the birth of a new talent. The GEO hasn't recorded a studio album in nearly 40 years, and Gil Evans passed away in 1988, even though sporadic recordings were released throughout the early '90s. Monday Nights is the first installation in a project of Evans' sons, Miles and Noah, to play the songs of the GEO just like they might have been played in the '70s and '80s--back when the ensemble played Monday nights at Sweet Basil in Greenwich Village. Monday Nights, therefore, is the first of a trilogy of recordings to be released.

This release doesn't fit cleanly into one category of jazz. Gil Evans' signature was a more theatrical sound, so there's a cross between big band jazz and more of those jazzy film soundtrack orchestrations from the '70s and the '80s, the ones where the opening credits are shown against the backdrop of a big city at night--usually a copter shot. Add to that a dollop or two of '80s funk, the more polished stuff that only flirted with the down and dirty. What you're listening to is a sound that's dated, but it's also coming back in a big way. This might be the first wave of '90s jazz nostalgia, dance music from a sunnier, more flamboyant time. 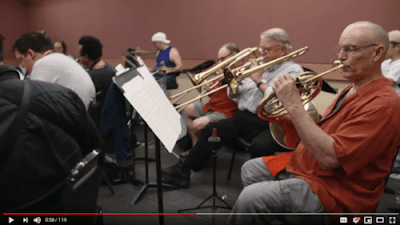 That's the point, of course, recreating a weekly event that started in 1983 and ended in 1994. For what it's worth, the Evans sons have retained that authenticity they needed to pull off the project--many of the GEO members from that classic period are still here, still able to maintain those daunting energy levels. But an important choice was made, the right one I suspect, to bring the recording quality to a more natural and modern level. The super-bright digital was in full swing in those days, and I am not interested in kicking back and listening to a re-creation of that sound. The stunning sound quality, therefore, is a gift.

What's most intriguing about Monday Nights is where it heads when the gas pedal is pushed all the way down, and the big band jazz conventions start to fishtail all over the road. There are hidden treasures, indeed, in these compositions, times when you head around a corner and notice you're in a new neighborhood where the beat is a little faster and stiffer, where the synthesizers kick up an orchestral wave that reinforces the cinematic ambitions of Gil Evans. It sounds great, of course, mysterious in its willingness to explore, even when it's playing tribute to an exact point in time and space.