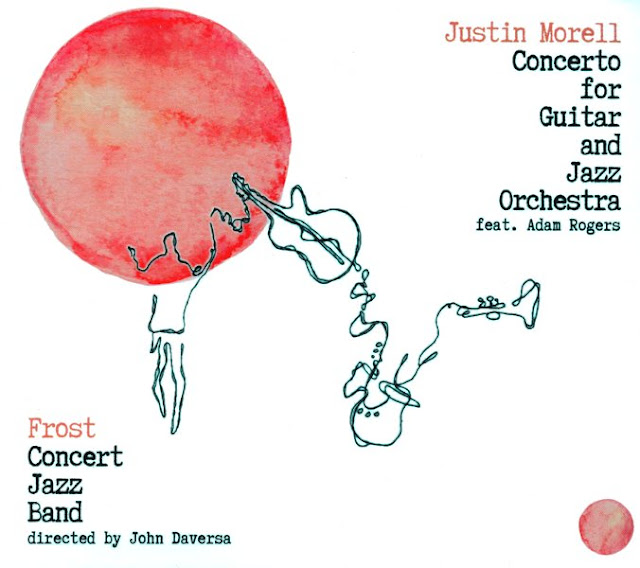 If you look at those first three words, concerto for guitar, you might start thinking about something from Rodrigo or Vivaldi. At least I did. Then I noticed the word "jazz" twice on the cover and instantly thought of big band jazz. Then I noticed John Daversa's name and I remembered his release from earlier in the year, American Dreamers: Voices of Hope, Music of Freedom which right now is nominated for a Grammy. Finally, I considered the phrase jazz orchestra and how that sometimes means something else, something that occupies the space between jazz and classical. Think George Gershwin.

This concerto heads off on another spur, however, a sound that's far more lush and sultry than garden variety big band jazz. Composer Justin Morell keeps the arrangement centered on fluid, slowly evolving short cuts from one genre to the other, with themes tight enough so you won't notice the shifts until they've been locked in place for a minute or so. This gentle swell of music is an effective background for Adam Rogers' guitar, which is precise and sometimes difficult but never in a way that doesn't serve the melody. He sits forward, much closer to the listener, and it's clear that he's the focus--which obviously makes perfect sense for a concerto. 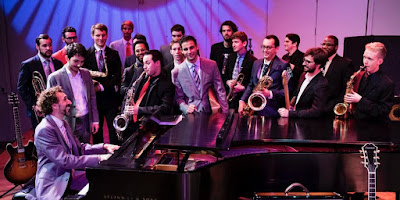 As we learned from American Dreamers, Daversa has a way of gliding between ideas in a modern approach to the arrangements. Here he is directing the Frost Concert Jazz Band from Morell's own arrangements, and suddenly you hear it, something you've heard before. Was that a little Mozart there? Maybe some Haydn? Wait just a minute--that's Beethoven. Then you notice that the concerto is set up exactly like a concerto, with three movements. That shouldn't have been a surprise to me, but it was. That's when you realize you have to stick the two halves together, all that guitar bouncing off yet another beefy horn section and sounding like big band jazz in every conceivable way, and then suddenly you hear the themes and see the structures and now you're nowhere near big band jazz.

Or, you can just read the liner notes which detail how this concerto was brought to life. Morell, in addition to being an Assistant Professor of Music at Lebanon Valley College, has already recorded six albums. He kept coming back to this idea of using classical concerto "language" in a jazz composition. This is daunting enough, but Morell also dipped into his past and implemented Brazilian rhythms and backbeat grooves to push the concerto even further into the spotlight. If this sounds like heady, cerebral stuff that only seasoned musicians will understand, it's not. Remember that I started off with the words sultry and lush to describe this album. It's a complex sound that will appeal to different people for different reasons, and that's why it's so good.
Posted by . at 12:18 PM