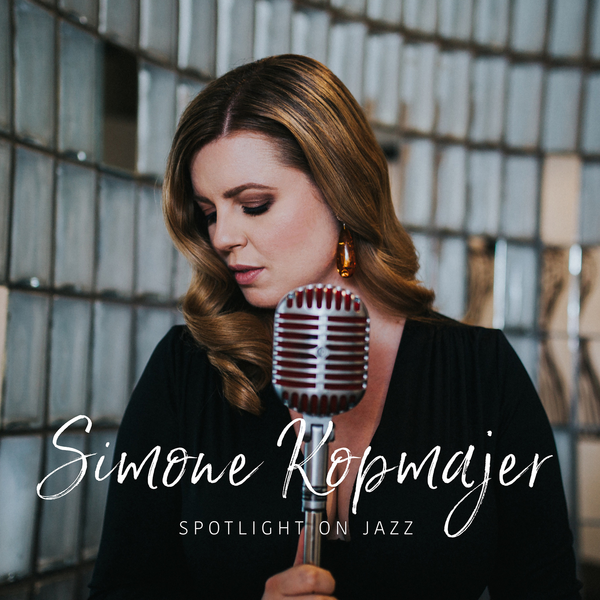 The coming and going of the new year added nothing to my quest to eliminate this pile of CDs and LPs. I spent much of the holidays in New England, which sounds very romantic, but for the first time in a long time we didn't have a White Christmas this year in the Big Bad North. We had snow on Halloween, single digits on Thanksgiving, but nothing when it counts the most. I did have plenty of jazz to keep me company when I returned, and I noticed how perfect this music is for this time of year, even if I'm looking at nothing but green lawns. Simone Kopmajer's new album, Spotlight on Jazz, stood out because it seemed Christmas-y without actually being about Christmas. It's a gentle, sweet kind of jazz, meant to be enjoyed in front of a big window, especially if you're secretly hoping for a blizzard.

Kopmajer is an interesting jazz singer for a couple of reasons. First, she's from Austria, which does not figure into her vocal delivery. You simply won't hear a little slip of an accent like you would listening to one of those amazing female voice recordings from Three Blind Mice, the ones where the Japanese singers perform a stunning rendition of songs like "Love Is a Many-Splendored Thing" in English but you can still kind of tell here and there. Second, her voice has enormous appeal. She comes from the dipped-in-honey school of jazz, where she sounds light and cheerful and yet always sexy--every word sounds like it's being delivered to someone she obviously loves.

That's not exactly a rare thing in the world of jazz, a female jazz singer who might be considered very attractive to a wide swath of folks, but Kopmajer isn't taking any short cuts. She has surrounded herself with one heck of a line-up, most notably tenor sax player Terry Myers who currently plays with the Tommy Dorsey Orchestra. Guitarist Martin Spitzer has an unusually light touch--his delicate and exotic work on "Poinciana" is a highlight. Paul Urbanek's piano matches the guitar's soft tone, and the rhythm section of drummer Reinhardt Winkler and bassist Karl Sayer knows how to lay back and sustain a dreamlike tinge to the performance.

That's what I enjoy the most about Spotlight on Jazz--its ability to lay back and let the rhythms evolve naturally, even when the tempos are slowed down just a bit, more than usual. This is a motif that offers a synergy to Kopmajer's voice and lifts up the sweetness, helping her to project an innocence that is unusual for someone recording her thirteenth album as a leader. This results in a perfect winter jazz album, quiet and thoughtful, one that will definitely having you staring out a window and wondering when the weather's going to turn.
Posted by . at 10:30 AM