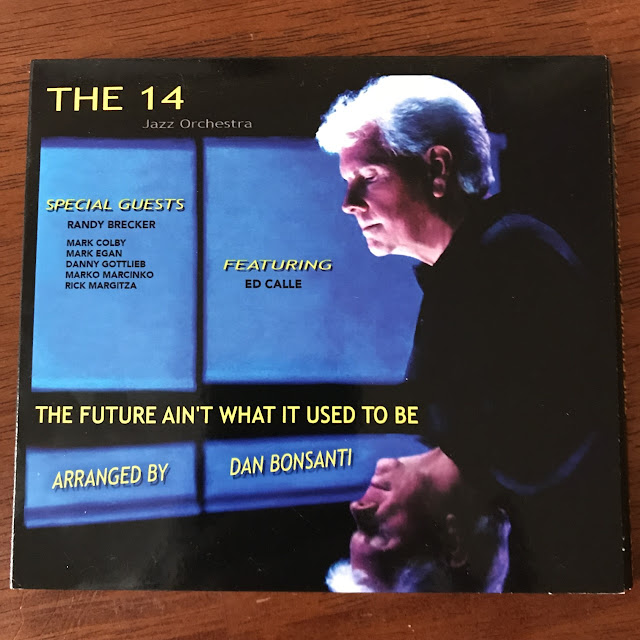 What's the name of Donald Kaufman's screenplay in the film Adaptation? Is it The 3? That's all I keep thinking about when I look at the cover of this CD. The 14. Sounds ominous, right? The 14 are here to tell you that the future ain't what it used to be.

The 14, of course, is a jazz orchestra--that's right, this is big band jazz and not another askew vision from Charlie Kaufman or Spike Jonze. The 14 are all alumni from the University of Miami, led by arranger Dan Bonsanti. Their previous album was titled Nothing Hard Is Ever Easy, so there's a playfulness at hand. But what else separates this big band ensemble from all the others? In a word, I'd have to say tightness.

That's the first thing I noticed about this album--there's a perfection afoot, an almost preternatural gleam to the way these musicians perform. Big band jazz is always about precision, of having every single person on stage doing what they're supposed to do. Mistakes and tangents get amplified by the others if you aren't careful, and even the improvisations are carefully measured before they are poured into the mix. I've heard sloppy big band jazz in the last year, and sometimes it's downright enjoyable in terms of sheer personality, but serious fans will frown at you if you get all Keith Moon on them. That's why there's a certain modicum of respect toward ensembles that get this much absolutely right. 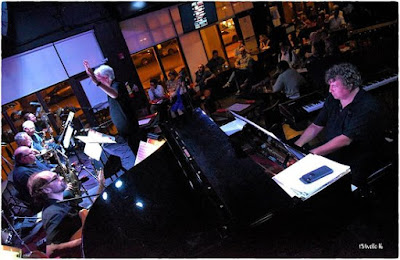 That's okay, of course. Sloppy is good with a trio or a quartet and often sounds like cacophony beyond that. Bonsanti and his skilled group of performers have that aura about them, the drive to be the best in their field, which may be cultivated from the competitive world of big band programs at American universities, something I've discussed often. Bonsanti himself has come from a very interesting background, arranging and playing sax for such leaders as Doc Severinsen (who's still around) and Stan Kenton. He's most famous for his work with Jaco Pastorius' Word of Mouth Orchestra. That's a lot of flavor right there.

It sounds like I'm complaining about something being too good, and I'm not. This is a tight band, but not one unwilling to take a chance or two. Just listen to The 14 take on that classic "16 Tons," a wild excursion that takes risk after risk and comes off as one hell of a party tune--one that is played, again, with utter precision. There's a vague feeling, in fact, that the band loosens up somewhat as the album goes on--they're just warming up, perhaps? You hear a little more variety in the instrumentation here and there, a few more genre swaps. The Future Ain't What It Used to Be is ultimately about one thing though, and that's beating the competition, but not at the cost of composition.
Posted by . at 12:15 PM