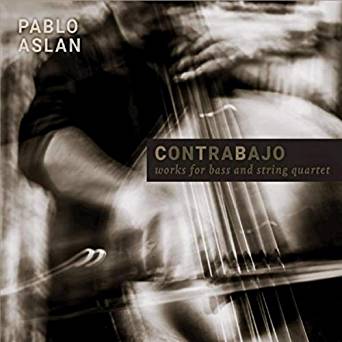 "At the suggestion of bandoneonist, arranger and composer Raul Juarena, I set out to create a body of work for bass and string quartet, in order to feature the bass not only as foundation and a melodic instrument, but as a driver of rhythm."

That's the basis of this wonderful recording from bassist and producer Pablo Aslan, and I have to admit this idea is right in my wheelhouse. One of my favorite recordings of all time is the Opus3 LP Concertos for Double Bass and Orchestra in which Thorvald Fredin and the Oskarshamn Ensemble tackle pieces from Lars Erik Larsson, Erland Von Koch and Giovanni Bottesini. That recording also puts the bass out in front--as it should be with a double bass concerto--but it reveals new ideas about how this instrument should sound.

Aslan has taken a slightly different musical approach with the music of Argentina--which implies the tango but is open to other genres as well. In 2016 he was invited to play a concert with Paquito D'Rivera and the Escher String Quartet, and that opened up the possibilities for this type of ensemble. Once you hear Contrabajo, you'll agree that this is both a lovely and expressive way to play this music. With help from D'Rivera's clarinet and bandoneonist Juarena on a couple of tracks, Aslan and the Cuarteto Petrus (cellist Gloria Pankaeva, violist Adrian Felizia and violinists Pablo Seravi and Hernan Briatico) work from a palette of such lush colors that this music rises above its genre boundaries and creates a sort of duality between what you hear and what you actually feel. 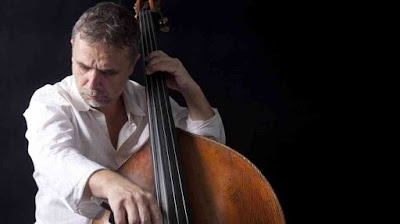 There's a pure originality at work, one that reminds me of my college days where I tried to broaden my horizons by absorbing as much new music as I could--everything from Philip Glass to Profofiev to Miles Davis. (I would have been blown away if I had heard this music back then--who knows how it would have influenced my musical path?) While tango is the touchstone on Contrabajo, Aslan is always willing to take sharp turns down hidden dirt roads to discover just how far he and his cohorts can travel. Aslan uses many traditional compositions for those tango themes from Alexis Cuadadro, Gabriel Seranes and Gerardo Matos Rodriguez, but that doesn't stop him from mixing it up with some Ellington ("Come Sunday") or even Villa-Lobos' Preludio No. 1. Those tangents are nothing less than fascinating, resulting in music that can be tropical and romantic or as daunting as a late night detour to the Bates Motel.

Despite the fluidity of this music, the recording process was unusual. Aslan worked on his basic themes first, on his own in his studio in Brooklyn and at ION Studios in Maine, and his two guests laid down their solos while visiting. He then packed it all up and headed to Buenos Aires where he and Cuarteto Petrus delivered the fully realized vision. "In fact, this process forced me, a performer, to understand the studio as a creative tool and an instrument in itself," he explains, and that is obvious throughout this recording. It's a mixture of the familiar and the unique, and it's another amazing musical sojourn for a promising 2019.
Posted by . at 8:51 AM