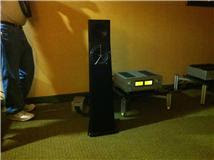 I really hate to hand out "Best Sound at Show" Awards, especially since the sound in the Polk Audio room was also utterly fantastic, but it was difficult to ignore the sound coming from the Advanced Home Theater Systems room at the Lone Star Audio Fest. For the most part the system was simple: a Luxman L-590A Pure Class A integrated amp and D-05 CD/SACD player fed into YG Acoustic Carmel speakers and wired with MIT cables. If you've read my AXPONA and CES reports, you'll recognize YG as the company who has touted themselves as making the best speakers in the world. Hyperbole aside, they're starting to convince me.

The Carmels are their new "entry-level" speakers. They are thin floorstanding two-ways that stand just a hair over 40 inches high. While their aluminum enclosures are flawlessly machined and their drivers obviously of the highest quality, I did balk at the fact that they cost $18,000 per pair. Then I listened. In my opinion, you get your money's worth. The Carmels were simply getting further into the music than any other speakers I've heard this size. Every musical selection sounded expansive, natural and deeply musical. The more I listened, the more I fell in love. 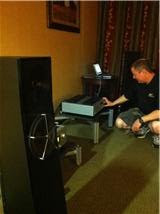 Bass performance was staggering. According to the brochure, they have "usable output" at 35 Hz, but I felt they were going even deeper. I told someone there that if I had the money, I'd be writing a check.

Scott Warren of Advanced Home Theater Systems was more than gracious in showing off this wonderful system. I gave him a copy of the Dean Peer Airborne CD and he went nuts. Even though the name of his Plano-based store seems to focus on home theater, he also carries stellar two-channel gear from the likes of DarTZeel, Von Schweikert and many others. You can check out his website at www.advancedhometheater.com.
Posted by . at 4:55 PM