I just returned from the Lone Star Audio Fest 2011 and had a great time. This is definitely one of the smaller audio trade shows out there, with the show only taking up a handful of rooms on the second and third floors of the Embassy Suites Dallas-Park Central. I enjoyed the spirit of the show with its emphasis on DIY and small local Texas audio manufacturers, but I still managed to hear a lot of good sound. In a couple of instances I heard truly great sound from a couple of noteworthy brands such as YG Acoustics, Audio Note and Polk.

Unlike most of the bigger audio shows, however, there wasn't a lot of turntables. (There also weren't a lot of equipment stands, with many exhibitors placing their products either directly on the floor or on the furniture supplied by the hotel!) 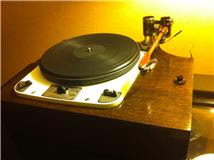 I did get a chance to spend a lot of time with this gorgeous Garrard 301 with a custom plinth. The tonearm is the Talea from Durand Tonearm; Joel-Francis Durand is a French composer who currently lives in Seattle. His tonearm spots a wand made from Bolivian Rosewood. He chose this wood after experimenting with a variety of woods and found this choice to be spot-on musically. The cartridge was an older Ortofon that still had a few miles left on it. 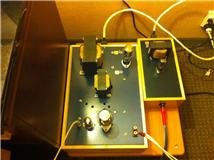 The amps were made by Scott Sheaffer of Found Music (www.found-music.com) who was running the room. These amps only provide about a watt per channel, and Scott was brave enough to pair them with Von Schweikert speakers that only had average effeciency. The result was a sound that excelled at low volumes, but need a little more juice to really impress. 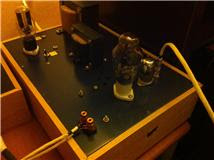 Scott's point was that you didn't necessarily need super-sensitive speakers to get great sound from "flea-powered" amplification, and from my own experience with SETs I know that you can still get great results as long as you listen to more intimate music at lower volumes in a relatively small room. But I'd love to hear these amps with something like a Zu Druid or a classic Klipsch. 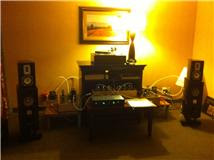 Still, I think Found Music is onto something here!
Posted by . at 9:00 PM