Magnuson's Crash of Cassini on CD 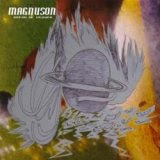 Here's a novel idea. Have a boy and girl duo start a rock band. It's only the two of them, just drums and guitar. They have the same last name, but it's unclear whether or not they're married, brother and sister or just a happy coincidence. On their website, they are holding hands. Hmmm.

Once you start listening to Magnuson's new CD, however, you stop comparing Greg and Kyrsten Magnuson to that other couple. The Magnuson sound is turgid and dense like a muddy thicket, less Zep and more Sabbath. The prog element, varnished with a Moog that growls deep within the mix, ensures that the paths never cross. This is not a stripped-down sound, laid bare, simple for the sake of being simple. This is two point sources being stretched out to fill a void with energy and a fair share of grime.

In addition, the couple sets out on a different path by taking turns on their instruments. That right...Greg plays guitar and Kyrsten plays drums on seven songs, and Kyrsten plays guitars and Greg plays drums on the other seven tracks. Much to my surprise I prefer the former arrangement; Greg tends to rely on rolling fills on his ground toms after nearly every measure while Kyrsten can both cross genres and lighten things up with her more varied rhythms. Both play their guitars almost as if they taught each other how to play. Perhaps they did.

Billing themselves as "the most musical mayhem ever created by a girl and a boy," Magnuson doesn't quite devolve into such chaos. Working within a garage-band aesthetic, they retain conventional song structures as they touch on the aforementioned Sabbath (the opener, "Dark Reality"), power pop ("Somewhere"), modern metal ("The Scout"), and classic '80s New Wave ("Fear and Deception"). You won't hear anything quite as groundbreaking as De Stijl, but you will get heaping, muddy doses of energy, harmony and, well, ground toms. There's nothing wrong with that. 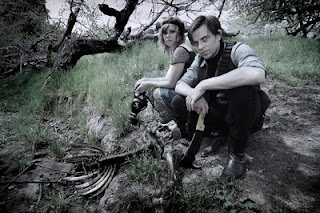 Email ThisBlogThis!Share to TwitterShare to FacebookShare to Pinterest
Labels: magnuson crash of cassini, the v