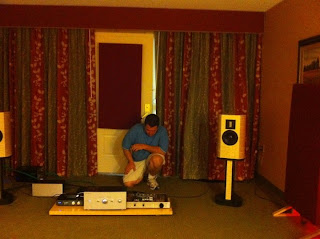 See this man? It's none other than Russ Gates of Polk Audio checking out the competition. The competition, by the way, is Vapor Audio, and they featured a surprisingly good system based on their Cirrus Loudspeakers and Eastern Electric amplification and sources. Vapor had quite an unusual set up in their room; the system was set up along the front wall in front of the door, so you had to literally walk through the cables and the speakers to get to a listening chair. I'm sure they arrived at this solution after careful voicing, because this system rocked. 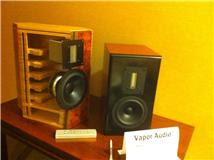 When I say it rocked, I mean this literally. I entered this room toward the end of the day after I had heard hours and hours of recordings featuring delicate female vocals, beaten down acoustic guitars and small-scale obscurities from around the world. I was asked what type of music I wanted to listen to, and the only thing I could think of was that I was dying to listen to something gutsy...like Tool. I asked if I could hear some rock. The answer was yes, which kind. I replied "Hard," but them amended my answer to reflect the fact that I didn't really expect HARD, but just sort of rocking. What did the gentleman play for me? "The Pot," from 10,000 Days. A star fall, a phone call, it joins all... While I was quite surprised with the weight and the power of these relatively small yet exquisitely shaped stand-mounted speakers, I shouldn't have been. The Cirrus starts at $3495 a pair, and each one weighs 53 pounds. It's a well-built and well-designed loudspeaker. I think I assumed that just because I hadn't heard of Vapor, they were another product from a DIYer who was ready to throw his hat into the commercial audio ring. But this a mature product that's available in many exotic finishes and with many intriguing upgrades and options. 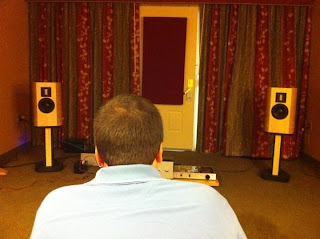 Needless to say, they were more than dynamic enough to work with Tool and send me off into the Texas night with a big smile on my face. For more about Vapor Audio, check out their website at http://www.vaporsound.com/. 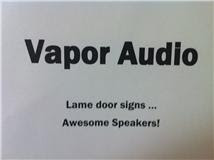