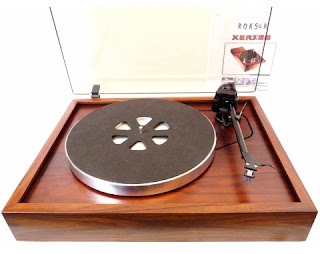 "I'm getting a lot of Linn Sondek LP12s in for trade lately," Gene Rubin once told me many years ago. I had just finished telling him how much I wanted to audition a Linn and hear what this legendary TT sounded like. I was also incredulous that people would trade these in--wasn't the Linn the best-sounding turntable ever made (a sentiment that had quite a lot of support back in the '90s)?

"What are they trading them in on?" I asked, slightly astounded.

"The Roksan Xerxes, of course."

Back when I first met Gene, probably 1991 or so, he basically sold two brands of turntables--Rega and Roksan. (Now he sells quite a few including Clearaudio, J. A. Michell and VPI). His reference rig was the original Roksan TT, a Naim ARO arm and an Audio-Technica OC9 cartridge. I heard this combo many times, and if I could afford the approximately $4400 back then, I would have splurged. I wound up getting a Rega P3. Later, I traded it in on a Rega P25, then a J.A. Michell Orbe SE. But I always had a lot of respect for the first Roksan Xerxes.

Well, Echo Audio in Portland currently has a beautiful rosewood veneered Roksan fitted with a classic Zeta arm and a Shure M97 cartridge. (I'd ditch the Shure for something more worthy of the Roksan.) He's selling this combo for just $825. This is a great 'table for less than a grand. Echo isn't offering shipping on this item, so some lucky Portland audiophile will probably wind up with this gorgeous analog rig.

To see the Roksan, just check out Echo Audio at http://echohifi.com/just_arrived.php.
Posted by . at 8:46 PM