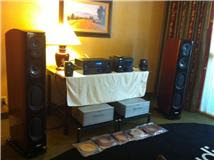 One of my main reasons for attending the Lone Star Audio Fest was to meet my longtime Facebook friend Russ Gates, who works for Polk. I've always enjoyed Polk speakers but wondered why they dropped off the high-end audio map over the last few years. Their amazing SDA speakers, which throw out a nearly 180 degree soundstage, were among my favorite speakers in the late '80s. Polk really seemed to employ a lot of research and development into their loudspeaker designs, but they suddenly switched their focus to home theater and car audio. They excel at both (my brother Greg owns a Polk-based surround system in his living room, and it has always impressed me), but I've missed their more ambitious speaker designs. 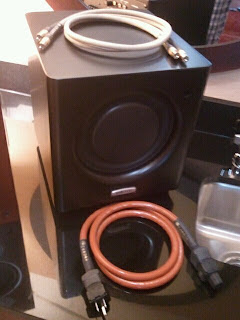 My concerns have been answered with their new flagship speaker, the LSiM707. This relatively tall floorstanding speaker is both gorgeous in appearance and impressive in performance, especially when mated with Jaton Operatta amplification and CD players, all hooked up with Cardas cable (Russ was the only exhibitor to use Cardas, which certainly gave him an edge in my opinion). Throughout the Lone Star Audio Fest I found myself wandering back to Russ' room to hear some truly nice sound. Toward the end of the show I gave Russ a CD copy of Dean Peer's Airborne and was taken with the LSiM707's ability to reproduce all of those splendid low frequencies. Russ, in turn, was equally impressed with Dean and made a comment about wishing he had had this CD for the entirety of the show. It's such great demo material. 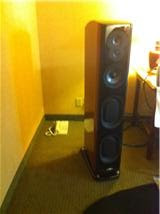 The LSiM707 will be part of an upcoming line of speakers that will include a smaller floorstander (called the LSiM705, I think) and a bookshelf version (the '703) that basically looks like the top half of the '707s with the same three drivers. Best of all, the '707s will retail for just $4000 a pair, which makes them very, very competitive at that price point. 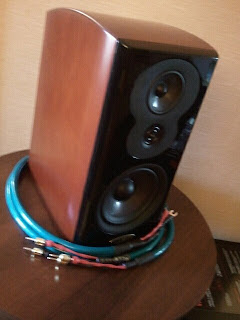 Polk Audio is definitely back on my radar, thanks to Russ. Now if we could just get Celestion to start making great mini-monitors like they did back in the '80s...
Posted by . at 4:29 PM