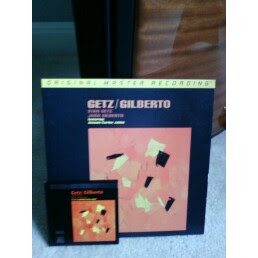 Another CD I picked up from May Audio Marketing at AXPONA NYC was the iconic Getz/Gilberto, again from FIM (First Impression Music). This CD features K2HD 24-bit 100 kHz mastering and is 99.9999% silver. I was so impressed with FIM's mastering of The TBM Sounds! that I was extremely curious to see how they did with such a classic.

There's a little bit of a backstory to this as well. For the last few years my Mobile Fidelity Sound Labs 200g LP was one of the jewels of my collection, one of the dozen or so LPs I always brought out whenever I made a change in my audio system. I always think it's amazing how "The Girl From Ipanema" is synonymous with elevator music, yet the original is such a cool, cool song. Nowadays, I get a little tingle whenever I hear this song in public, even if it's a watered-down, Muzak-y version.

Then I did a terrible thing. I accidentally put a big scratch in my copy one day--just careless handling. The last minute or so of "Para Machuchar Meu Coracao" now had an audible pop all the way to the fade out. I was bummed. So when I grabbed the FIM CD at AXPONA, I knew it was ostensibly to replace the MFSL. 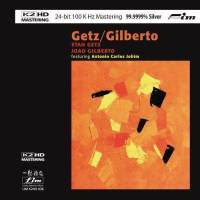 Still, I decided to compare the two late last night. When I first heard the FIM CD at Axpona, I felt the sound was smooth, full and lifelike, much like my memory of the MFSL. But when compared side to side, the results were surprising. The MFSL kicked the FIM's butt in almost every conceivable way.

With the MFSL, I could simply hear more of the music come through. Milton Banana's soft yet complex brushwork on the cymbals was far more detailed and complex; I could detect his body shifts and the minute little fills around the rims of the drums. Tommy William's bass sounded much more deep on the Lim CD than the MFSL, but it was almost too deep and disembodied in comparison. The bass on the LP was far more nuanced, and I could clearly hear William's fingerwork on the frets.

Stan Getz's sax also sounded too isolated and far forward from the mix with the silver CD. On the MFSL, Stan sounded more like he was in the same room with the other musicians during the recording. Finally, Astrud Gilberto's lovely and relaxed voice was far more restricted to the right channel with the FIM, coming straight out of my speaker and nowhere else. With the MFSL, her voice was still centered on the speaker, but the decay expanded backward into the soundstage in a far more realistic way. 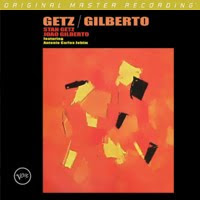 I'm surprised by these results. After hearing how close The TBM Sounds! came to my Three Blind Mice Cisco LP reissues, I had high hopes for the Getz/Gilberto. Alas, it fell short.

As for that scratch, I'd forgotten an important detail. While using the Walker Audio Prelude record cleaning system on the MFSL a few months ago, I was able to relegate the pop to something much more tolerable. While record cleaners certainly can't repair actual scratches, I think that original scratch was just more a scuff. Last night I kept waiting the pop to materialize, and it never did. I've never encountered a record cleaning system that achieves as much as the Walker does.
Posted by . at 3:48 PM