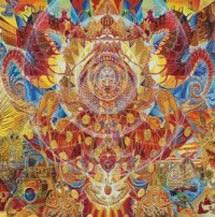 A few months ago I received a beautiful and mysterious slab o' vinyl that may be the most gorgeous picture disc I've ever seen. This 12", from an enigmatic Portland band called White Orange, basically featured two versions of the song "Middle of the Riddle"--a long extended psychedelic hyperjam and an edited radio-friendly version that basically extracted the middle section and eschewed the lengthy build-up and fade outs. "Middle" was a playful, grungy '70s style hard rock song, only occasionally top-heavy with thundering prog metal riffs.

Well, I have the new White Orange debut CD courtesy of Kaytea at XO, and it's quite a different animal--even though it inserts the shorter "Middle of the Riddle" in the showcased track 3 position. Judging from the first two tracks, "Where" and "Color Me Black," this is a band that plays on the same jungle gym as bands like Mastodon in a playground just across the street from the guys in Tool. White Orange cites such influences as Dinosaur Jr, Sonic Youth, King Crimson and Syd Barrett, but this suggests a looser, free-form sound. Instead, White Orange's sound is tight, heavy and ornate. 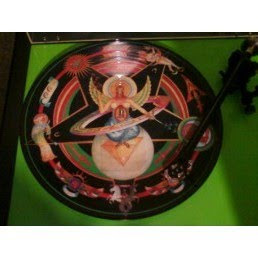 The promo copy provides White Orange with such whimsical descriptors as "psychedelic sludgy doomy stoner rockers" and "full of hazy solos, waffling clean vocals, gauzy druggie guitar figures"--and that's pretty damn close. (Is it bad to put promo copy in your review? Especially when it's this entertaining?) The vocals are processed heavily and border on lugubrious, adding a Gothic tinge to the songs (Nathaniel Hawthorne gothic, not Bauhaus gothic), and the guitar riffs are fuzzy, simple and have all the subtlety of a mudslide. If you're so inclined, your head will bob rhythmically to these paleolithic slabs of arena rock. If we had White Orange back in the '70s (and my memory of a couple of Hot Tuna LPs come close), we'd be wreaking major destruction on Saturday nights with songs like "Dinosaur Bones" and "Wonderful" as our official soundtrack.

If I don't quite embrace this particular wall of sound, it's more a result of my own fading youth than anything else, and perhaps my desire for more precision in my metallurgy and less "sludge" and "haze." But, as someone much younger than me recently said, White Orange is one of the more thoughtful, interesting and inventive prog metals out there. I'm inclined to agree. Perhaps I shouldn't be reviewing something this tumultuous on a Sunday morning, but I'm awake now, and ready to break something.
Posted by . at 12:03 PM