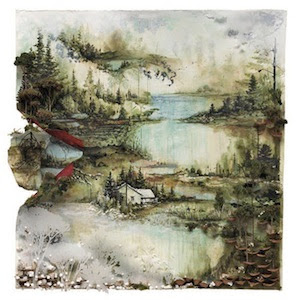 I'm concerned about the current state of alternative folk, freak folk or whatever you want to call it. Just a few years ago it was by far the most interesting music genre in terms of the arc of its development as well as its diversity--performers as disparate as Joanna Newsom, Sufjan Stevens, Devendra Banhart and Espers all lounged beneath its umbrella. Over the last couple of years, however, the genre has settled into stark, delicate and ethereal acts such as Animal Collective, Grizzly Bear and now Bon Iver, and while taken separately these bands are all making cogent, dreamlike music, but as a whole I'm starting to want more there there.

Bon Iver's eponymous new album is the perfect example. If Justin Vernon, who basically is Bon Iver, had never released 2008's For Emma, Forever Ago, I think this new album wouldn't be the critic's darling it is. Forever was a minimalist and intimate recording performed pretty much by Vernon himself, and its simple honesty and genuine heartbreak created a rare beauty that captured a lot of people's attention. Now we have the new album with its expanded pallette of musicians and suddenly we're faced with singing that is processed and dubbed into a Beach Boys-like soup that's starts to grate on the nerves after about four songs. There are a couple of examples where Vernon drops his voice about an octave just to mix things up, but I found myself wishing for some new harmonies--hell, even new notes--in the mix.

Making matters worse, the LP pressing is troublesome and noisy, and for a few songs I thought it might be time to re-tip my Zu DL-103 cartridge. Nope, that fuzziness and distortion is intentional and somehow accentuated on the vinyl, something I realized when I played other albums. Perhaps I'd be a bit easier on this album--which really is getting rave reviews--if I'd gone straight for the CD. That's what you should do, in my opinion.
Posted by . at 12:59 PM