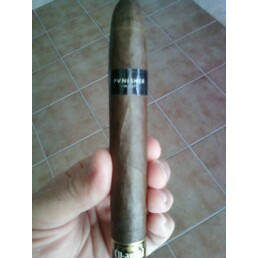 A couple of weeks ago I ordered a five-pack of the Punisher (or Pvnisher, if you want to take the Romanesque font on the band literally) from Cu-Avana. I've previously smoked a few of the Punisher's little brother, the Intenso, and found them to be spicy but not unusually so, about the same level of boldness as a Man O' War Ruination. The Punisher, which costs more than twice as much as the Intenso, doesn't sport an unusually dark or oily wrapper as some of the spicier blends, but it's by far the spiciest cigar I've ever lit up.

Here's some of the sales copy from Cigar.com:

"Be warned, Punisher is no joke. This full-bodied, potent blend of Nicaraguan ligero tobaccos is one of the strongest cigars we've ever experienced."

And here's the funny part:

"You'll feel the power of Punisher as soon as the stick touches your lips - it's natural to experience a numbing feeling even before you light this firecracker up. Breathe, it'll be ok."

By now I'm asking myself...do I really want to smoke this? What have I gotten myself into? But I lit it anyway and by the time I was finished, I was a fan. My lips weren't quite numb, but it was VERY spicy--almost as if this stick had been infused with Tabasco sauce. Beneath that spicy bite, the Punisher was actually smooth and incredibly well-constructed and put out copious amounts of smoke with each draw.

I've been burned (pardon the pun) by some of the spicier sticks out there; the Diesel Unholy Cocktail, for example, had so many conflicting flavors going on that it confused my palate. Some of the Kristoff Maduros, on the other hand, have a one-note spiciness that is over-simplified--it's like grilling a steak and seasoning it with nothing but a crapload of black pepper. The Punisher is outstanding, complex yet satisfying. I wouldn't want to smoke one every day, but I will order another 5-pack soon.
Posted by . at 3:10 PM