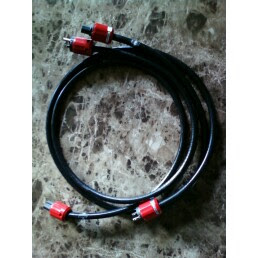 For the Heed review, I used the Oyaide Tunami GPX power cords on both the Obelisk SI and the X2. Dan Muzquiz of Blackbird Audio Gallery urged me to give them a try since he found them to be a synergistic match, something that propelled the Heeds to the next level. The Oyaides are not inexpensive at $540 each (that's for the 1.8 meter lengths with the 046 paladium over gold connectors), and if you're one of those audio guys who scoff at expensive power cords, you may not find them a viable option for a $1650 integrated amplifier and a $1200 power supply. The Heeds, however, are so illuminating in their ability to surpass your expectations that it makes sense to try different things and see just how far you can take their performance.

Admittedly I'm reluctant to review premium-priced power cords since that path is so rife with skepticism. In addition, I've done it once before I was hard-pressed to come up with 1200 words describing what they did for my system. But before I address what the Oyaides did, I have to point out a few things to the naysayers:

First, you have to have a highly resolving system before you hear differences in power cords. Throw a $540 power cord into a $1000 system and you'll hear no differences, which is precisely what a lot of these skeptics have done on their way to complain on the Internet discussion forums. High-priced cables and power cords are what you consider after all your other components are assembled and you're fairly satisfied with the results. Cables and power cords can fine-tune your system, but they will not transform it.

Second, premium power cords offer, at the very minimum, a robust way to hook up your components. Combined with hospital-grade outlets, a well-made power cord will seat firmly into the wall socket and probably never come out on its own. If you've ever friend a pair of speakers due to a loose connection behind your rack (and I have), this is a valuable feature (but admittedly not worth $540).

I compared the Oyaides with both stock power cords and a pair of Golden Reference power cords from Cardas Audio. There was no doubt about it--both the Cardas and Oyaide power cords offered definite sonic advantages over the cheap guys. Usually the sonic benefits of premium power cords are related to the lowering of the noise floor--with richer silences you'll always hear more of the music coming through. I also felt that the regular power cords shrunk the size of the soundstage a couple a feet in every direction, and bass was somewhat more limited (again, more of a function of a lowered noise-floor than any sonic "transformation" that might have occurred).

Comparisons between the Cardas and the Oyaide were a bit tougher. Honestly, I heard very little, if any, differences between the two power cords. Both did an outstanding job of making my system as quiet as it's ever been. Both cords made the little Heeds sound big and powerful and dynamic. I'd really like to say I heard some difference between the two, but I didn't. Both elevated the level of performance of the Heeds in a very tangible way, however, and they made it impossible to go back to the Heeds with the regular power cords.

The only issue left to resolve is your willingness to attach a pair of $540 power cords to $3000 worth of amplification. I look at it this way: the Heed Obelisk SI and X2 external power supply are a screaming deal at their MSRP. Is it worth $4000 to get a more quiet and refined and dynamic performance from them? I think so, and I stand by my opinion that the Heed/Oyaide combination is still my first choice for solid-state amplification at this price point. 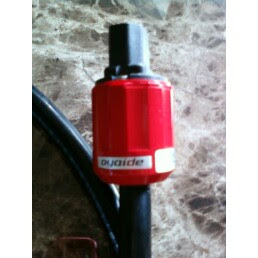