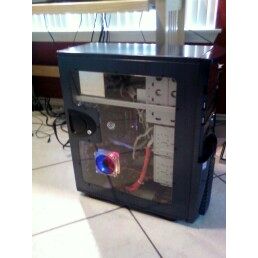 This is to give you an idea what kind of work my brother Mat does for us at Blue Computer Solutions. This was an old abandoned machine that belonged to a teenager. His parents wanted to buy him a whole new machine for Christmas. We took the old machine, cleaned up the rat's nest inside, replaced the hard drive, the CD-ROM and DVD drives and the power supply, gave it a lot more RAM and installed a fancy new fan that has lots of flashy colored lights. Mat even waxes the case so it's shiny and lustrous. And this new machine is a BEAST that will play any game on the market. And the total price was less than one of those cheap basic laptops that will last you maybe 18 months. 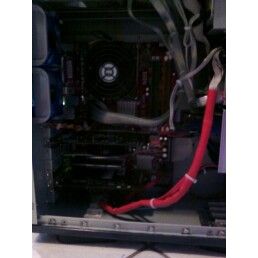 In this economy, we're trying to show our customers that it may be better to re-do your old computer than to throw it away and buy a new one. Like I said, the life expectancy of a laptop is somewhere between 18 months and two years, which really isn't enough. I've had my laptop for four years now, and it's running just as fast as the day I bought it from Mat. All you need is a trustworthy tech. Unfortunately, we can't help all of my friends who read this blog from places such as India, Hungary and Australia, but if you're in central Texas there is simply no one else like Blue Computer Solutions.

I know this sounds like a commercial, but a lot of it is simple awe. My brother Mat, the baby of the family, was always the problem child. Now he's this computer guru who can do things no one else can. At Blue, every single one of our customers loves what we do and the vast majority of our business comes from extremely enthusiastic referrals. And it's nice to be part of something that isn't about making a bunch of money. Like Mat says, he just wants everybody to be happy.
Posted by . at 3:15 PM