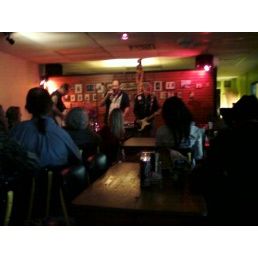 If you've been reading this blog over the last week or so, you already know about Spencer Thomas and the Texas Pie Company. Well, Spencer was finally able to combine his love for singing the blues with making the best pie in Texas by performing with his band last Saturday night at the Texas Pie Company. Spencer recently expanded the dining area of Pieco to accommodate live music performances, and he hopes that his October 30 show is the first of many to be held in downtown Kyle.

Now, Spencer is much more than some restaurant owner who likes to sing the blues on the side. Spencer has been part of the Austin music scene for over 25 years, so he is a polished and talented performer. He started off the night with a solo acoustic set from 7pm to 9pm  (for "the older set...because it's gonna get real loud later on tonight!"). He played standard after standard on his acoustic guitar, everything from classic blues to ballads to rock 'n' roll from the 50s. Spencer's voice was something to behold, raspy enough to project years of experience and powerful and clear enough to drive the message home. Spencer's also one of those singers who's well-known for his between-song banter with the audience; he had us in stitches for most of the night. 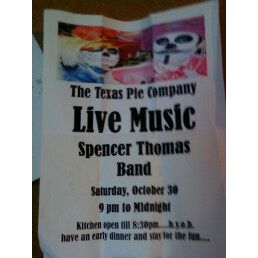 When Spencer brought his band out, the mood changed from intimate to unrestrained. Now I know why Spencer prefers to call his type of music Texas rhythm and soul rather than blues rock--he skips across different genres such as soul, R&B and flat-out rock 'n' roll and makes it his own. Everyone in the room was either slapping their tables, tapping their feet or even cutting a rug in the makeshift ballroom out by the display counters for the pies. At one point Spencer told the crowd to just buy houses up and down Center Street so we could form our own arts and music district in downtown Kyle. Judging from the turnout, Kyle could definitely support it.

I even spoke with Spencer's outstanding guitarist, Michael Holt. Michael's another one of those Austin musicians who has been around for a long time and has played with the best--he's currently a producer for V-8 Records. He talked guitar shop with my brother Mat and gave me one of his new CDs with his band the Trophy 500s, Zero Miles to Empty. I'll give it a spin over the next few days. 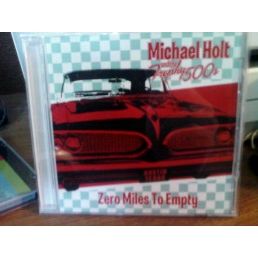 Once again it was a great night at the Texas Pie Company, and hopefully the first of many live shows. The sound quality was amazing, by the way, clear and not too loud. (Unlike most of the venues along 6th Street in Austin, I might add.) Plus, I got to experience all this while eating the great food at Pieco. We had authentic Cuban sandwiches (roast garlic pork, ham, Swiss cheese, mustard, pickles and mayo on Cuban-style bread), and a couple of Pieco's exquisite Key Lime Pie minis. I even got to try a few bites of the Almond Joy pie, which is like a bunch of Almond Joy candy bars melted into a pie crust. It was amazing.

But before I give more credit to Spencer, I have to point out that Pieco's amazing food all comes from Spencer's wife and business partner, Julie Albertson. She was a gracious and charming host all evening, and her recipes should be stored in Fort Knox. "That Key Lime recipe is about as pure and authentic as it gets," she told us. It's the best I've ever had, and I'm a real snob when it comes to Key Lime Pie.

I look forward to more from the great Pieco family in the near future!
Posted by . at 10:25 AM