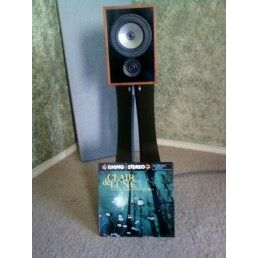 Today I listened to one of my true reference LPs, the RCA Living Stereo re-issue of Clair de Lune from Raymond Agoult and the London Proms Symphony, which is always a treat. Recorded in England in 1959, this recorded is one of the most beautiful classical albums I've ever heard, and the sound quality is rich, natural and very earthy. Now that I have my Trenner & Friedl ART monitors settled in on their Quadraspire stands, and now that they've been broken in for almost a month, I'm starting to do some serious listening. I put the LP on the platter of my modded Rega P3-24 and cued side one.

For me, Clair de Lune has always been a soothing album, as in sooooooootthhhing. There are a few crescendos here and there, but for the most part this album is meant to be relaxing. (For those who are unfamiliar with the album, it's a collection of moon-themed classical piecs from the likes of Massenet, Tchaikovsky, Elgar, Bach, Gluck and of course Claude Debussy.) Starting with the first side, however, I noticed how exciting this music actually is. On Tchaikovsky's Chants sans Paroles, for example, I was actually startled once or twice by the wide dynamic swings.

The ARTs may be small, but they don't sound small. For me, that's the mark of the best audio equipment, the feeling that the soundstage is limitless and that you're listening--and looking--into something that's life-sized. While the tiny ARTs don't go as low in the bass as a true full-range speaker, they do present a big enough soundstage to preserve that feeling of sheer size. Even the double bass section was presented mostly intact, with even the deepest notes sounding melodic.

Along with this size goes dynamics, and this is where the ARTs surprise me like no other mini-monitors. I had to lunge for the volume once or twice because I just wasn't prepared for the sudden, emotional swells in this music. The ARTs also capture all the detail of the quiet passages. In fact, one thing I noticed yesterday when I was listening to my German ARS pressing of Fleetwood Mac's Rumours was that all of the fade-outs were longer on each song, and I was able to hear more of the tiny details at the very end. I don't think I've ever heard a speaker that could do that, except for maybe some huge panel speakers that cost quite a bit more than the ARTs.

That's my thoughts for the day on the ARTs. Fantastic little speakers so far.
Posted by . at 4:59 PM