The One That Got Away: The LFD Mistral integrated amplifier 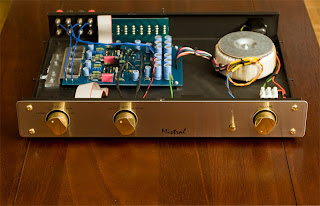 "That's a lovely pastel-sounding amp you have there."

That was Grover Huffman, maker of Grover cables and interconnects, upon hearing my system back when I lived in the San Fernando Valley. Grover was a semi-mysterious guy who made cables and interconnects in his spare time and sold them on the Steve Hoffman forum. I ordered a pair of the interconnects just to check them out. They were relatively affordable, and everyone on the forum including Steve Hoffman himself raved about them. Well, it turned out that Grover lived just a mile or two away from me, and he couldn't resist saving the shipping and handling costs by delivering them in person.

After swapping out a pair of Chord Company interconnects for the Grovers, we settled in for a listen. Back then (it was probably 2004 or so), I had my reference analog rig which consisted of a J. A. Michell Orbe SE turntable, an SME V tonearm and a Koetsu Rosewood cartridge. Speakers were my Spendor SP100s (which are still being used by the ex). And driving this $12,000 analog rig and a pair of $5000 speakers was the simple yet elegant LFD Mistral integrated amp, which retailed for a relatively low price of $1095.

I'm still a little confused about Grover's "pastel" reference. It's one of those audio descriptions that you kind of understand, but not quite, like a chocolate-y midrange or a citrus-y treble. (Yes, I've seen both of those terms used in audio reviews.) I think he meant that the LFD's sound was light, airy and almost see-through. It was sunny, like an Easter weekend in Phoenix. It was the opposite of chocolate-y--it was as transparent as a cold glass of 7-Up in a pink champagne glass. Or something like that.

Anyway, I had no problem using $1100 of amplification with $5000 speakers and a $12,000 analog rig. (Actually, I used LFD's outboard phono stage with the Mistral, so it was technically $1800 worth of amplification.) The LFD was that good. For most of the time I owned the LFD (probably from 2000 to about 2005 or so), I was always looking for a "better" (aka more expensive) integrated to take its place. When I bought the LFD, it was an interim solution after I sold my Naim NAIT 2/NAP 140 combination. I tried a few different amplifiers such as Quad Classic monoblocks, a vintage Scott 299B and a few others and I never quite felt compelled to replace the LFD. When I sold it on Audiogon for $500, I knew it was a mistake. The guy I sold it to wound up re-selling it, and he got more than $500 for it by advertising that "This is the unit owned personally by Marc Phillips, the Vinyl Anachronist!" It wasn't until I bought my very expensive and very low-powered Yamamoto Sound Craft SET amplification that I felt I was on the right road again. 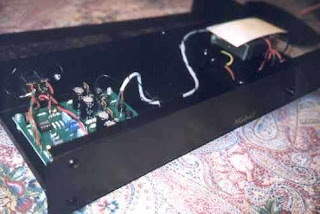 I still remember buying the LFD Mistral from Gene Rubin. I invited myself over one day because I hadn't seen Gene for a while, and I wanted to hear some of the newer gear he was selling. He showed me the LFD Mistral because he was excited about it; LFD was a new line that he had just started carrying. He asked me if I would stick around and help him compare it to the Naim NAIT 5, his current reference at that price point. Actually, the NAIT 5 was roughly $1600 back then, $500 more than the Mistral. After about an hour of A/B comparisons, I was undecided. They both sounded very, very close. Gene, however, was leaning toward the LFD, feeling that more of the music was coming through.

After I left, I started thinking about the LFD. Having owned the Naim NAIT 2 for so long, I was eager to get the new NAIT 5 as a more powerful replacement. But a little voice kept telling me to save $500 and get the Mistral. A couple of weeks later, I called Gene and told him I had to have one. I asked him, while he was at it, to throw in the cool outboard phono stage. And I was happy for the next five years.

I've used a lot of amps since then, and I often think of my favorites from brands such as Nagra, BAT, conrad-johnson and SimAudio. I even think of the Mistral's successors, the $2995 Zero Integrated LE III and the $6000 NCSE, and how I loved both of them. But something tells me that I'd still be very, very happy if I still owned that original Mistral amplifier. I think it would be better than my current Rega Brio 3. I think it would be better than a Naim NAIT 2, too. And I probably wouldn't have to pay such inflated prices for a used model like I would with the NAIT...at least until the word gets out.
Posted by . at 9:10 PM