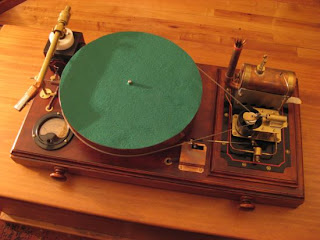 Yep, this is a steam-powered turntable designed by a New Zealand-based "steampunk" artist named Asciimation (ASCII...I get it). The accompanying article is a bit critical of the design, mostly because the speed control is obviously shaky. I'm not nuts about the fact that you have to swing the tonearm all the way back across the record to play it, either, but Asciimation assembled this from parts in his garage and probably did the best he could.

But it's still a fun design and shows that turntables are spreading across several demographic groups in the 21st century.